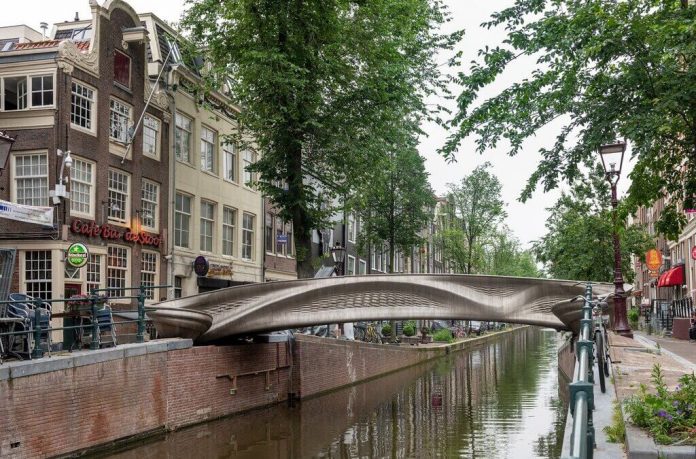 It took four years of study and 4.9 tonnes of stainless steel to build the pedestrian bridge.
If you thought 3D-printed scooters were cool, just wait until you see where you can use them in Amsterdam. Engineers in Amsterdam’s Red Light District constructed the world’s first 3D-printed steel bridge over the Oudezijds Achterburgwal canal earlier this month. According to a report from Imperial College London, the bridge is now accessible to pedestrians, cyclists (and, presumably, scooterists) after being dedicated by Queen Maxima of the Netherlands. 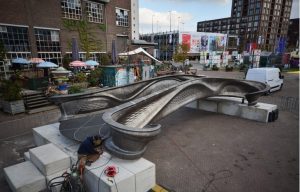 The bridge’s physical construction took four massive, torch-wielding robots six months to build, layer by layer, utilising a total of 4.9 tonnes of steel. However, experts at MX3D, a Dutch company, spent four years conducting preliminary research and development to ensure that the end product would be safe.

The bridge is equipped with a variety of sensors that measure tension, movement, vibration, and temperature to assure its continued soundness. Data from all of the sensors is sent to a digital twin of the bridge, which is a virtual bridge that is recreated on a computer and will aid scientists in monitoring the structure.

3D printing, formerly the domain of tech-savvy enthusiasts, has recently discovered a wide range of industrial applications. A California firm discovered a method for 3D-printing 350-square-foot homes in less than 24 hours in 2020. Throughout the pandemic, 3D printing was looked into as a solution to fill in the gaps left by medical supply shortages.