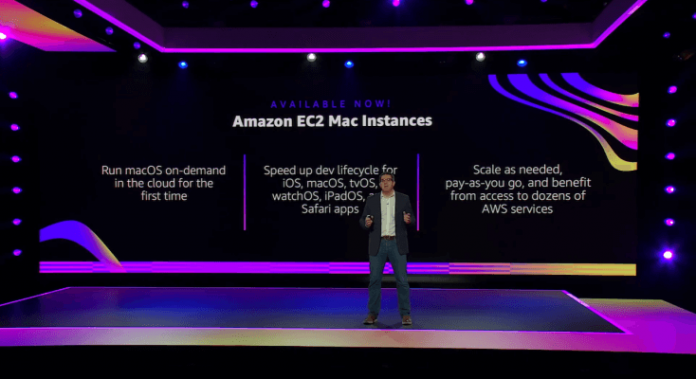 For the first time ever, Amazon has decided to bring macOS to its AWS cloud. The Amazon Web Services re: Invent conference started with a big surprise announcement that the company is introducing Mac mini to AWS cloud. Now you can find new Mac mini instances on Amazon’s Elastic Compute Cloud (EC2). This feature will allow the developers to make applications for iPhones, Macs, iPads on AWS. The Mac mini instances come with a 3.2 GHz processor, 32 GB memory, and access to other services of AWC. It is the 8th Gen Core i7 and also comes with a turbo boost up feature up to 4.2 GHz.

The prices for this will not be cheap, but the preview of all-new EC2 Mac Mini instances is now available. Initially, Amazon aims at targeting a selective audience, i.e., the developers. AWS wants to provide developers with an environment where they can build and test applications for Mac and iOS. Moreover, with remote access, you can get a Mac mini in the Cloud, which is fully featured.

With respect to the networking, the mini instances run in a VPC (Virtual Private Cloud) and comprise of ENA networking, which has a throughput of up to 10 Gbps. Mac has built-in networking options, and AWS uses these options and connects them to Nitro System. This will help with fast network and storage access.

This development is very significant for developers. This is because developers have access to a big cloud provider that will allow them to run XCode in the Cloud. The company’s pricing is not announced yet; however, the company will announce more information related to this at the re: Invent event. From today, 1st December, the Mac instances will be made available for N. Virginia, Ohio, Oregon, Ireland, and Singapore AWS regions.